Parents write in to share information on Super Blue Green Algae, another natural product for ADHD that many swear by.

"Have you ever heard of Super Blue Green Algae? It is a super food which grows wild in Upper Klamath Lake in Southern Oregon. This algae is the most nutrient dense food on earth, there is nothing else like it on the planet. There are no additives, extracts or fillers of any kind in the algae; just all natural wild food, that is flash freeze dried, within 15 minutes to keep this food enzymatically alive !

Getting back on track about the ADD, there have been two studies done using the algae to investigate the effects of eating Super Blue Green Algae on children who struggle with learning, social and behavioral problems. The Centre For Family Wellness Study had their research team question whether the addition of Algae to children's diet would help alleviate these challenges. The statistical analysis of the data gathered during the study makes it quite clear that eating Algae appears to have had a notably positive outcome in those areas of concern for a majority of the study sample.

The test instruments were The Achenbach Child Behavior Check List and The Teacher Report Form. These well-respected test instruments have high validity and reliability and have been used in several national studies. Of the 109 of 142 who completed the study the mean age was 9 years and 1 month. There were 55 girls ranging in age from 4 to 16 (mean age 9 yrs.4 mths.) and 54 boys ranging in age from 3 years, 6 months to 17 (mean age 9 yrs.).

I have a daughter Jessica who is diagnosed ADHD, she has a twin brother Jarret, they are 16 they have an older sister Heather who is 18. Jessica was on Ritalin for 9 months and it was a sad thing to see, violent mood swings in the a.m. before she took her Ritalin and in a drugged state while on the drug, and that is what it is a drug, controlled by government for our kids. They call it pediatric cocaine over here. When Jessica got home from school, the Ritalin would be wearing off, here comes the mood swings again, constantly fighting with her siblings. At bed time, it was a battle every night as she was still wide awake from the Ritalin, there was a lot of missed school because of no sleep.

Two years ago a friend told me about Super Blue Green Algae, but I guess it wasn't the right time in my life. I laughed at him and ridiculed him for thinking I might be interested in something as strange as actually eating algae. Last March he told me of the study that showed remarkable improvement in chilren who had eaten Super Blue Green Algae in a controlled test. My wife and I decided to try it, me first , three weeks later my wife started eating the algae. My wife Gaye, felt the effects of this super food the first day she tried it and one week later Jessica was off Ritalin and eating Super Blue Green Algae.

I wish I could say Jessica was now a model student and everything was great in her life. While not perfect it is a whole lot better than 1 year ago. There are no violent mood swings as before, she has transferred to another school and was put back a grade, where she is doing very well and learning at her level Grade 10 which should have been done 3 years ago ! Our school system doesn't think kids should be degraded into staying in a grade two years if they cannot do the work assigned them, so they keep pushing uneducated kids into the world some barely able to read and write. We decided she would be better off repeating a year at another school where she knew no one and could start anew.

Didn't mention the fact this company Cell Tech donates 10% of every year's harvest of the algae to charity. This is called the 10% Solution. It goes to impoverished nations like Cambodia & Nicaragua and Chernobyl, Russia to combat the effects of radiation. This algae is a known blood purifier because of it's high levels of chlorophyl. Another 10% solution project is South Central L.A. , teaching gang members to get along. There are others but I am getting long on this letter also."
For more information, you can contact Terry as follows:
Terry McCracken : email tmccrac@mnsi.net

There's also some more information to be found on the ADHD Outreach Website.

"I can't find Super Blue Green Algae in my local Natural Foods Store so I bought just regular Blue Green Algae, Gingko Biloba, St. John's Wort, and Valerian. This combination works well but I'm still working on the right dosage trying other things when I learn about them. I just mix it into applesauce. My daughter who is a double dose case-meaning both me and her father have ADHD-goes from bouncing off the walls to being calm and attentive. She still complains, still whines, and still hits once in a while and is still active but not to the point she was before the 'dosing'. I tried Pedi-Active ADD and it didn't work at all for her, but the Blue Green Algae works immediately!!! I am completely into the natural alternative!!!

next: Supporting Teenagers with ADHD
~ back to adders.org homepage
~ adhd library articles
~ all add/adhd articles 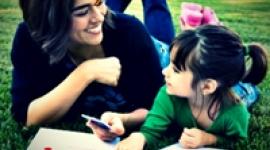 Corporal Punishment From A Religious Viewpoint