What Is Sexual Assault?

What Is Sexual Assault, Exactly?

Most people, if asked, "What is sexual assault?" would think the correct answer is rape. While aggravated rape certainly qualifies as sexual assault, many different types of this violent act exist. Perhaps you picture a stranger breaking into a victim's home or jumping out from behind a clump of bushes to attack a woman walking down a street at night. While this type of "stranger rape" represents one form of this criminal act, it's important to realize the wide scope of unwanted sexual contact that many people experience also qualifies as sexual assault.

Most states have adopted a broad sexual assault definition to cover the many types of nonconsensual sexual acts that affect individuals and their communities. Sexual assault takes many forms, but the common thread involves the loss of power and control experienced by victims.

There are many types of sexual assault. Some victims may not even realize that they've experienced sexual assault unless they become educated about the different forms of this violent act. Any type of nonconsensual sexual activity or contact qualifies as sexual assault, including:

In general, most state sexual assault laws assume that a person did not consent to sexual contact if they were threatened, unconscious, drugged, mentally disabled, or a minor. Any sexual act or contact that makes you feel uncomfortable, afraid, or intimidated could fall in the category of sexual assault.

What Is Sexual Assault? 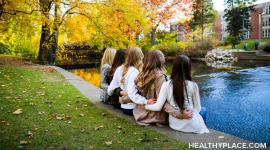 Sexual Assault Support: Why You Need It, Where to Find It

What is Date Rape, Acquaintance Rape?

How to Talk to Someone About Self-Injury

Getting Past The Bitterness

Depression is Common in People Who Self-Injure: Therapist's Comments