Schizophrenia and the Mad Rantings Of "Psychos"

Opening a book entitled Psychos on a Saturday evening in the bargain section of a local bookstore, I came across the rantings of an author that symbolizes the hatred and stigma that people with schizophrenia often face. The defining characteristic of the psychotic, according to this New York Times bestselling author, is a "lack of empathy" followed by deranged criminal behavior. This fundamental and obvious flaw into the nature of the psychotic is still perpetuated to the public, by authors with an abundance of both influence and ignorance.

His words currently echo in bookshelves throughout the world:

Functioning psychosis--which is to say, the psychosis that interacts with us, day to day--is largely characterized by lack of empathy: the inability to feel or care about others. This enables psychotics to move through the world without the burden of sympathy or conscience, indifferent to moral codes that makes no sense to them. (Skipp, Psychos, 4) 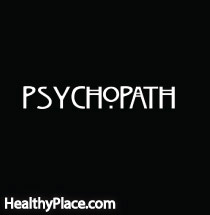 It is unfortunate for John Skipp and his readers, that he was unable to find a dictionary prior to smearing and hate mongering the very same disabled individuals, which he knows nothing about. The defining characteristic of the psychotic, has nothing to do with empathy, but a loss of touch with reality. Clearly he is confusing the word "Psychotic" and "Psychopath", which are entirely different psychological conditions.

Psychopaths are the ones characterized by a "lack of empathy," and suffer from a condition otherwise known as "anti-social personality disorder, an entirely different psychological disorder altogether. It is defined in the Diagnostic and Statistical Manual of Mental Disorders (DSM-IV) by traits and characteristics that are very different than people with schizophrenia and others that suffer from psychosis. In fact we are much more likely to be the victims of psychopathic criminal behavior than the perpetrators of such acts. A statistic that has been cited many times by several different studies.

Despite such evidence, writers and the mass media continue to bash people with schizophrenia. Too often such individuals live in a black and white world of good versus evil, where devilish entities stalk the streets and the do gooders are their to stop them. It is a fictional delusional world that exists only within the minds of people that are busy trying to prove themselves superior, by stomping on the weaknesses of others.

John Skipp has sold his books, by inciting fear and panic through misinformation and ignorance. Millions of people have picked up his works and read his pathetic insight into schizophrenia and psychosis. It's people like John Skipp that make my life more difficult and dangerous to live in, through nonsense writing such as this:

To psychotics, morals and empathy just seem like a big load of hooey: meaningless stupid obstacles between themselves and whatever they might hope to achieve. This is the mind-set that allows a person to ruthlessly step on others, treat them like shit, and kill them if necessary or otherwise exciting." (Skipp, Psychos, 4)

Such falsehoods about people with schizophrenia are sadly conveyed time and time again, so often that people wrongly believe that we are destined for criminal and deranged behavior. There are many people with schizophrenia that live in ways that are not so different than that of the ordinary person. They take their schizophrenia medication, see a doctor regularly and manage their illness. They do so in ways that keeps them out of the hospitals and into the communities. They live amongst us, some going so far as to succeed in a world that so often hates them.

People often say things like, Schizophrenia is not a split personality disorder, it is in fact a “split from reality” or in other words a break from reality.
However, if you have not split from reality, broken away from reality, and thus are in touch with reality, then you know what reality is.
Yet we still wait for physicists to fully understand reality. But they can't do it, because they are not in touch with reality. They are not in touch with what is real. But if you are in touch with reality, then it is even an easy breezy chore to discover all by yourself what is today described as the Einstein's Special theory of Relativity(SR) phenomena. I have no physics education, but that did not stop me. Plus I independently derived all of the SR mathematical equations. ( No one else on this planet has done it in the same manner. )
However, no one believed me because I had been tagged as a schizophrenic. No one believes the words of a schizophrenic. So I put my words and proof on YouTube to shut them up. https://www.youtube.com/watch?v=KKAwpEetJ-Q&list=PL3zkZRUI2IyBFAowlUivFbeBh-Mq7HdoQ
In other words, the so called sane people, in general are also not in touch with reality.
To give you another example. There I was with my portable shopping cart on my way to the grocery store. In doing so I noticed that near the top of a light pole were a couple of birds circling. They were using a hole near the top of the light pole as a bird nest. But I also knew that these particular birds do tend to protect their nests to the extreme. So I said to myself, I better keep an eye on them on the way back after picking up my groceries. On the way back I totally forgot about the birds, but sure enough, one of the birds had decided to come down and violently peck me on the back of the head.
I then felt the back of my head and it was wet. Yes wet with blood. The blood was beginning to run down the back of my neck and also got onto my shirt collar. A couple of people in a car that was passing by noticed this and they found it very amusing and were laughing profusely.
When I got back to my apartment I noticed several of my neighbors in the hallway only a few feet from my apartment door.
Since the situation was somewhat amusing I thought I would tell them about it. They knew of my medical condition and so in their opinion I was basically not to be listened to. But I told them about the bird incident anyway. They basically said, "OK bird hit you on your head.... Head is bleeding.... All right then, that is a very nice story, but we have to go now.". In my mind I was shaking my head thinking about just how stupid these people were. Once your labeled as a schizophrenic, nobody believes a word that you have to say.
However, when I turned around and headed towards my apartment door, the woman that I had just spoken too noticed the blood on the back of my head, and so she felt it was necessary to run towards me and tell me that my head was bleeding, and did so even though I had told her this just moments before.
That is an example of how horrible people can be toward schizophrenics, via their sheer stupidity.

Oh I really liked the tv show perception! It seemed to be spot on in some of the situations. Like they did their research before producing a show about a man with mental illness. The main character delivered his part very well. I wish it were still on. I would watch!

There are some TV shows that increase esteem because of the accepting of the mentally ill and their empathy potential. One show is Perception where the detective has schizophrenia but so under control he can solve crime with his 'extra-sensory' ability brought to bear from anxiety. It is comedic even if he 'bumbles' a few crime scene investigations but is successful using profiles of criminals and creative emotive emotion giving and intellect along the lines of another show, The Mentalist. Bravo.

Indeed, this answer to above mention book exhibits strong and straightforward indicator against primitive and antipsychiatric attitude toward mental health, as crucial factor to global well-being. Unfortunately, there are still many misconceptions in public opinion on mental illnesses and theirs psychiatric treatments. These ironic slander about mental disorders perplex current psychiatric treatment and management of patient with mental difficulties, particularly when they came from ignorant and non-professional writers. On the other hand, these antihumane view of points enfeeble global effort to better interpersonal relation as predictor to understanding and peace all around the world. It is huge harm to publish these kind of pamphlets in the era of epochal achievements of neuroscience on satisfying treatment of mental disorders.

As a person who has been psychotic in the past and someone who cares deeply about mental health there needs to be a shift in the language we all use which refers to mental health issues. 'Nuts' 'crazy' 'wacko' 'psycho' 'schizo' need to be replaced with less harmful and marginalising words. It should not be ok to be flippant about mental health anymore. We all have the same rights and needs as each other.

Bravo to you for setting the record straight. I too get so annoyed by authors who have the audacity to write about something they are clearly ignorant about. I recently read Missing you by Harlan Coben. He too gets confused when describing a character with mental illness and chooses to erroneously paint the mentally ill as violent and scary.

Horror films often call people deranged/insane/psychopaths/psychotoc/insane/loonies - to create a thrill of fear.
My uncle was diagnosed as schizophrenic for over 20 years, then bipolar... I am bipolar and find myself not only invalided out of my job but not taken seriously by my bank. No sympathy or help from my family.
PS: flaw into the nature of the psychotic -??? (near beginning).
Several unnecessary commas. Is hate monger (hatemonger/hate-monger) a verb?