In an email conversation I had last week with someone who also has Dissociative Identity Disorder, the issue of hospitalization came up. I was impressed by this person's pro-active perspective. He appeared to accept the fact that inpatient stays are sometimes a part of the recovery process. Historically, my attitude has been much different. But I've decided his forward-thinking approach is healthier. 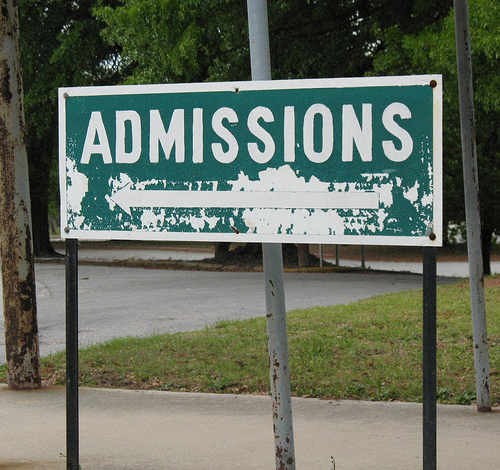 I resist hospitalization with everything I've got. Part of that is probably just my prideful nature; asking for and accepting help is often far more painful for me than white-knuckling my way through on my own. But some of it has to do with stereotypical attitudes about inpatient psychiatric interventions. As a society, we tend to view mental health crises very differently than physical crises. Nobody expects you to soldier on if you've just been hit by a car. But what if you're struggling with debilitating psychosis? What if you're suicidal? There are a number of reasons why psychiatric hospitalization might be necessary temporarily, but every one of those reasons is generally accepted as within an individual's control. This is not only an erroneous assumption but a dangerous one.

In this video I discuss my most recent hospitalization experience and why white-knuckling it through on your own is not always the wisest choice.

This is a very brave video and I wish you well.
Its important for folks who are MP or identifying with dx of DID to realize when they need help outside of their own group efforts ,or when some folks in group are having a hard time. There may be times of the year one person has a more difficult time then another or(alter). It is also importent to enlist help from those within ones own System/Family or Group for support, to those folks,as well, to keep a group up and running functioning and communicating well.

I encourage folks to stay in Therapy steadily during the good high functioning times, as a backup added support. Its important to always remember a basic , we in Groups at time forget, we are with a group, always the WE not ME

If one should fall on hard times it does not always mean danger and disaster, but when communication goes way down between each other..it can be very helpful to have a Therapist on hand that knows all group members strengths and weaknesses, and concerns too . Somebody, of a support , all in the group can feel comfortable to speak too, before it all gets too confusing, more of a preventative effort, is the best.

I am sorry some in your group felt it a failure to be 'in patient', if only to talk,hang around get evaluated, its highly unlikely and rare that anyone is kept very long these days( even if exhibiting a psychosis state,even if feeling unsafe, rare to be actually "held" in patient.if they have a ongoing Therapist they are seeing. More common to be sent for follow up daily till things diffuse If that helps others to know..maybe they will go to "talk" if need be.

I hope you and yours, continue to take care of each other and recieve help when it is offered during this time. Peace Blessings to you
Maria and Mosaics
Holly Gray
November, 13 2010 at 7:20 pm
Hi Maria &amp; Mosaics,

"Its important for folks who are MP or identifying with dx of DID to realize when they need help outside of their own group efforts ,or when some folks in group are having a hard time."

I'm realizing how right you are about that! It's very hard, not just to realize it but to follow through with action. But I know you're correct and appreciate the reminder.

"It is also importent to enlist help from those within ones own System/Family or Group for support, to those folks,as well, to keep a group up and running functioning and communicating well."

My therapist has been talking with me about that more recently, as I've been struggling more. She's encouraged me, for example, to ask someone who isn't afraid to come close when I'm feeling fear. It's a new idea, so I forget to do it all the time. But I'm trying.

Thanks so much, Maria &amp; Mosaics.
Paul
November, 9 2010 at 3:39 am
I hear all the things you mention in your video. Great video! I am sorry you felt like you had to sneak out of the hospital. For parts of you, I am sure the decision was not at all reckless. I hope you feel better now.
Holly Gray
November, 9 2010 at 2:50 pm
Hi Paul,

Thanks for watching and commenting!

"For parts of you, I am sure the decision was not at all reckless."

I'm embarrassed to say I hadn't thought of that. You're right of course. I suppose the idea of staying put was far more threatening to some parts than wandering off and pushing through without help was. Thank you for pointing that out.
kerri
November, 9 2010 at 12:16 am
Often when people have mental health issues they end up feeling stripped of their confidence to take charge and act with purpose during moments of clarity. And I think In some ways the mental health system promotes and perpetuates this. So it's not surprising that for many of us self admissions are viewed as failures to cope, rather than constructive strategies to give ourselves a leg up when we need it. I think this has a lot to do with the old medical model Dr 's and hospitals are still following
Holly Gray
November, 9 2010 at 2:47 pm
kerri -

Once again you have articulated beautifully a struggle I and no doubt many others have with Dissociative Identity Disorder (and other mental illnesses as well). I think you're so right - we are in charge of our own recovery but in so many ways that's either not possible or not honored. It's frustrating and I think you're right that this lack of confidence about what's best for us and taking appropriate action contributes to many, many people not getting the help they need.

That's a very good point, Holly. It's interesting that even though WE know how important and healthy hospitalization can be to us, we still harbor those same attitudes ourselves.

My last hospitalization probably saved my life. But even so, I waited at least a week longer than I should have, until I could no longer function at any level before I'd consider it. (I didn't have a DID diagnosis at the time, so was hospitalized then for severe PTSD symptoms.)

Interestingly enough, during that last hospitalization I ended up leaving as well. I don't remember it but people on the ward said I looked pretty upset and stormed off... I found myself a few miles away, basically in the middle of nowhere totally lost and had to have the police help me get back. THAT's embarrassing, let me tell you. I'd sure like to know WHY some parts would resist getting help... doesn't make much sense to me.

It's good to hear from you again!

" ... I waited at least a week longer than I should have, until I could no longer function at any level before I’d consider it."

This is what I always do. It's ridiculous. I'm rolling my eyes at myself as I type this!

"I’d sure like to know WHY some parts would resist getting help… doesn’t make much sense to me."

My guess is that there are parts for whom the hospital is highly threatening. For them, storming off and getting lost (oh thank goodness we didn't get lost last Friday after sneaking out!) is a small price to pay, perhaps? I understand what you mean though about it not making sense. It's very frustrating. I try to remember that they're just protecting themselves/me.

I am feeling much steadier, yes. It's funny ... the dread starts in mid-September, then things get worse and worse throughout October and it all peaks during the final week. But every year, on the evening of the last day of the month, the storm passes. And it's all over until the next year.