One of the two most popular theories about the development of Dissociative Identity Disorder states that if you take a child with an intact identity and apply severe force for long enough, the child’s identity will splinter into pieces. I call it the Broken Vase Theory. I also call it wrong. 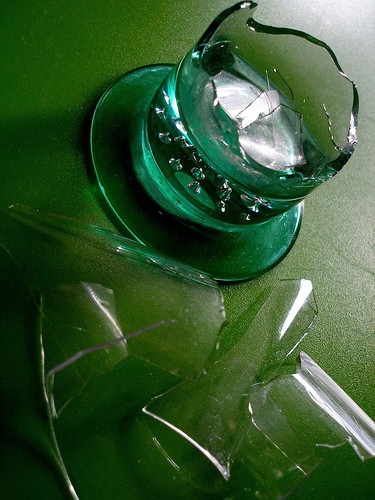 My primary issue with the Broken Vase Theory is that it assumes an initial cohesiveness of identity that simply doesn’t exist. The idea is that we come into this world as whole beings and, like vases, are vessels of a kind. We absorb experiences and carry them with us, as vases hold water. If some of those experiences are destructive enough, we crack and break under the pressure and are no longer whole. But the development of Dissociative Identity Disorder begins in early childhood when the identity is highly malleable. A child’s identity isn’t whole and intact like the Broken Vase Theory suggests. It’s therefore inaccurate to say that those of us with Dissociative Identity Disorder were once whole and now, due to trauma and other factors, are broken. We were never whole. No one was.

A vase is a tangible, physical object. The mind, however, is not. The Broken Vase Theory posits that we are, as I said, intact identities that are subjected to trauma and, as a result, break. But the development of Dissociative Identity Disorder is a dynamic process involving continual interaction between the environment and the mind, and between the mind and itself. We were not whole beings broken into pieces by external force. We were evolving beings adapting to our environment, shifting and adjusting as necessary.

In psychological terms, adaptation is seen as an attempt to reach a state of equilibrium in the face of pressure originating from both internal and external stressors. Adaptation has been a part of humanity since the beginning of humankind. If I need to walk on two legs to survive, I learn to walk on two legs. If I need fire and tools to survive, I develop tools and learn how to use fire in ways that will benefit me. – The Dissociative Identity Disorder Sourcebook, by Deborah Haddock

The Development of Dissociative Identity Disorder is a Complex Process

I don’t see the development of Dissociative Identity Disorder as a simple case of cause-and-effect. I see it as the process by which our malleable identities shape themselves to meet the demands of both our external and internal environments. I see it as a series of adaptive responses that culminate in identity fragmentation so severe that those of us with DID experience ourselves not as one person, but as many. The Broken Vase Theory fails to recognize that human beings are growing things, not inanimate objects. And that’s essentially why I place it firmly in the realm of misconception and credit its popularity with the stereotype that people with Dissociative Identity Disorder are broken. I certainly feel broken. But I don’t believe I truly am.

My Dissociative Memory is a Problem
Dissociative Identity Disorder: I'm Not Multiple
Poser
April, 5 2011 at 1:56 pm
Hi Holly-
You hit the nail on the head...as usual. I actually learned this past week in therapy that I avoid/dissociate because I don't view the WORLD as safe. I am learning that dissociation is to avoid feeling, and feeling unsafe is where we come from. We dissociate rather than feel. Learning to feel without dissociating is proving to be quite a challenge.
Poser
Kathleen
April, 4 2011 at 3:55 am
I read what you said about multiple vase in the HealthyPlace newsletter. I was ignored and neglected emotionally from infancy. I was diagnosed with DID but disappointed the therapist because she wanted names and more info than I had. All I know is that at any time I am whatever the people around me want me to be. I don't know what it feels like to be loved or how to love. I have spent a lifetime studying people so as to know how to react to various human experiences. Sometimes, if I am tired, I react inappropriately but always with humor. Humor helps so much because that way people can't see how sad I am and how fearful. My biggest fear is to be among people who notice that I am not the way they know me. More and more I isolate out of fear and exhaustion. My mom was so manipulative and at times cruel. Now I am 65 and feel like there is no hope for a better life. I did my best to love my children and protect them. I would imitate books or other people. My ex-husband was cruel and abusive in every way. I married him at 18 because he said he loved me and I needed it so much. He didn't. That made me feel unlovable and when we divorced his last words were that no one would ever love me and I would be alone forever. That was 21 years ago and I am still alone.
Holly Gray
April, 5 2011 at 12:37 pm
Hi Kathleen,

Thanks so much for reading and taking the time to comment.

"My biggest fear is to be among people who notice that I am not the way they know me."

This is so, so common. I call this Worlds Colliding, and it is a deep-rooted fear of different, separate aspects of self being thrust together. I think it's possible that the fear of Worlds Colliding does more to keep people with Dissociative Identity Disorder isolated and in hiding than stigma.

I want to respect the hopelessness you feel, but also offer the thought that perhaps your fate isn't sealed. Perhaps there is hope to find the support and validation you deserve. If you can't hope, I'll hope for you. Because I believe without a doubt that it's possible to live a vibrant, fulfilling life with Dissociative Identity Disorder.

I hope to hear from you again, Kathleen. Thanks for joining the discussion.
Priscilla
April, 1 2011 at 1:06 pm
I totally agree! Grat article :)
Holly Gray
April, 3 2011 at 4:30 pm
Thanks Priscilla!
Poser
March, 31 2011 at 5:17 am
Holly-
I continually try to learn more about the illness that has a firm grasp on my life. I have to admit, I've never heard this one before, but it certainly sounds plausible. I also have to admit that I was originally put off by the thought of having never been "whole". I guess I want desperately to believe that I too was normal once...whatever normal is.

The one issue I find with the broken vase theory is that, although the world is ever changing, requiring constant change from us and our identities, what about safety? As we grow older and learn more about the world, finding it to be safer than what we knew of it as young maleable beings...why don't we stop switching? Every theory bases identity creation as a form of protection...when does it or why doesn't the changing/protection stop? We are adults now...we can handle this.
Poser
Holly Gray
April, 3 2011 at 4:15 pm
Hi Poser,

"As we grow older and learn more about the world, finding it to be safer than what we knew of it as young maleable beings…why don’t we stop switching? Every theory bases identity creation as a form of protection…when does it or why doesn’t the changing/protection stop? We are adults now…we can handle this."

There are a lot of reasons. Not the least of which is that if you have DID, dissociation is your primary way of coping. Across the board. It's automatic. This is just your way of being in the world. So to change it takes work. It takes becoming more aware and learning how to cope without using dissociation.

But perhaps the bigger issue is the one you brought up ... safety. I'll ask you, do you genuinely feel safe now as an adult? My logical, rational brain tells me, "of course I'm safe!" But that doesn't mean I *feel* safe. I don't. At all. I suspect that many people, perhaps most or all, with DID didn't just learn that the situations they were in were unsafe as a child. No, they learned that the world isn't safe. When you learn, as a child, that the world is not safe, you always need protection.

"We are adults now…we can handle this."

We do. Dissociation is part of how we handle it. ;) This is part of why treatment is so complex. These are core beliefs and changing them isn't easy.
Natasha Tracy
March, 29 2011 at 8:58 am
Hi Holly,

Interesting. At first glance the broken vase theory seems to hold water (ahem). But when you poke further, you're right, we have a protoidentity as a child and it is highly mailable.

Which led me to this analogy, which I'd be interested to hear if you agree with:

A human being is a vine growing up the side of a cliff. The vine would always grow straight up as we mature. However, when things get in our way (stressors) like rocks and roots and trees, we have to adapt by changing direction. What we end up with is a very squirrelly vine that's not sure where it's safe to go next.

It's just a vision I had as I read your words. Perhaps it fits, perhaps it doesn't. Just curious.

Anything that is living is bound to be a better metaphor for the development of DID than inanimate objects. And I like your metaphor for another reason: it's universal. In other words, the person with DID isn't some entirely different species. We're all of us vines - living, growing things, interacting with and responding to the stressors in our environments. I very much like that.