Self-sabotage is hard for anyone to deal with. But I think managing self-sabotaging behaviors when you have Dissociative Identity Disorder is more difficult. So when I say that I think doing so is a matter of acceptance, communication, and compromise, I don't mean to over-simplify the monumental challenge that it is. Accepting things that directly impact your life in negative, destructive ways is frightening to say the least. But the most life changing negotiation with an alter I've ever had wouldn't have happened if I hadn't done exactly that. 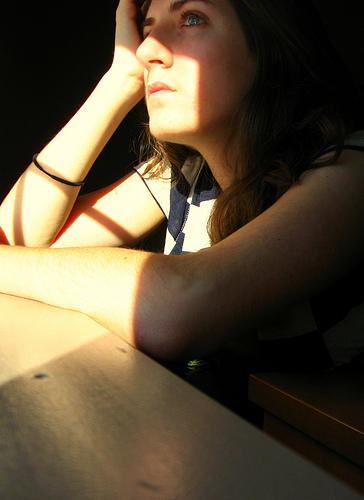 Last February I spent three weeks in an inpatient trauma recovery program. I went for one reason: to learn how to communicate with my alters. Diagnosed with Dissociative Identity Disorder five years prior, I still felt like I was talking to walls. I was desperate for guidance, but when I got there I couldn't talk about DID. I wasn't shy, or embarrassed; I simply couldn't speak. With the help of a skilled therapist, I learned that a member of my system was effectively blocking all communication. She was responsible not only for my inability to talk about DID with the very people I'd come to for help, but also for the lack of internal communication that had stalled my progress for years. I was furious at the deliberate self-sabotage. And I felt helpless to do anything about it.

We cannot change anything until we accept it. Condemnation does not liberate, it oppresses. - Carl Jung

You Aren't Helpless against Self-Sabotaging Behaviors

To me, genuine acceptance means not expecting things to change. Which sounds an awful lot like helplessness. But really, as long as you're focused on what you want to be different, you cannot see things as they truly are. By railing against the alter who prevented me from communicating with my Dissociative Identity Disorder system, I ensured I wouldn't understand her perspective. If my focus had remained on stopping her behavior, I doubt I would have learned the value of it. When I was fighting the self-sabotage, I was helpless; when I accepted it, I realized that hers is a useful skill.

Acceptance Can Change Your Perspective on Self-Sabotaging Behaviors

The alter I was so furious with last February can still block communication, but does so on a more selective basis now. And I couldn't be more grateful. She controls the dissemination of information and by dispensing knowledge gradually - managing the flow of communication, in other words - she keeps the system from being overwhelmed. As it turns out, that was her motive in the first place. By accepting what was once self-sabotage, I saw possibilities I didn't even know were there. So much about living with Dissociative Identity Disorder feels like fumbling in the dark, unable to see your next step. It makes sense that managing self-sabotaging behaviors begins with a huge leap of faith in the form of acceptance.

Dissociative Identity Disorder and Self-Sabotage
Mental Health Warning Signs: Note from the Bottom of a Cliff
Dr Musli Ferati
February, 7 2011 at 7:24 am
The fundamental mental handicaps of dissociative identity disorder(DID) according to DSM-IV are amnesia, depersonalisation, derealization and identity disturbances. All of these was characterized with Self-sabotaging behaviors as a result of confusing roles which posses the affected person. As it is known the current psychiatric medication mitigates the psychic disturbances without improved the definitive outcome of this complex psychiatric entity. So, Your recommendation to accept the diagnosis of this complicated disorder presents a fulcrum to smooth-course the same disease. Your experience gives evidence quite well. This so much more, when we having in regard that our brain with its plasticity might to make miraculous things.
Suede
February, 4 2011 at 7:05 am
Hi Holly,

I never post but read all the time. I just wanted to say thank you for being so brave and honest to the mass public. I still struggle with being DID and self sabotage constantly. Thankfully I have an awesome T.

I hope your doing ok I am a tad worried cause I have not seen you post in type, audio or video. Just thinking about you no pressure.
Mareeya
January, 31 2011 at 3:54 am
Lenore,

"...Someone inside started working against me instead of for me."

I think this might be pretty common when you hit those deeper issues. Your system has been trying to hide these painful issues from you...probably to protect you.

I think it is very important to share all of this with your therapist. I was afraid to share with my therapist that I couldn't recall some of our sessions. I finally swallowed my pride and told her. Now I wish I had told her a long time ago.

Internal communication might just be the hardest thing I have ever tried to do. Expressing myself to the outside world has always been a huge struggle for me, now I have to communicate with parts of myself who are hiding from me.

Mareeya,
I'm pretty much in the same place as you. Early in the acceptance of my condition &amp; trying to figure out this whole communication thing. There have been been a few times when I have been able to communicate effectively w/ a couple of those inside &amp; I think,
"Okay, I've got this now. I've figured out how it works &amp; should have no problem communicating from now on."
Then everything inside shuts down &amp; I'm at a loss as to what to do. Up until we started hitting some deeper issues in therapy, self-sabotage was not an issue. Then things started happening that didn't make sense. Someone inside started working against me instead of for me. I'm trying to find out why...I ask, but get no answer. Hopefully in time we can work it out.
Mareeya
January, 28 2011 at 1:47 pm
"I went for one reason: to learn how to communicate with my alters."

I just came home from my therapy appointment, and this was our primary focus of our session. I have an alter that has started coming forward while I am at work. So far....no damage on the job has been done, but I never know if, or when "my work cover" or "work mask" or "work part" is going to be blown.
I am supposed to try communicating with this alter to find out what she needs me to see, and to try to encourage her not to come forward while I'm at work. I'm supposed to either write to her, or communicate through imagery.
I guess I'm not trying very hard, because I'm getting nowhere.
I am so early in the acceptance of my DID itself, that communication seems so bizarre, and out of reach. A year ago, I was still refusing to accept my diagnosis. I without a doubt accept it now, but I'm getting so frustrated.
My therapist explained that there is a battle going inside, which I already know. But she told me that because of my resistance, some parts of my system do not realize they can trust me, and find me unapproachable. I hope I am understanding her correctly. I felt only partially present at the session today.

"So much about living with Dissociative Identity Disorder feels like fumbling in the dark, unable to see your next step. It makes sense that managing self-sabotaging behaviors begins with a huge leap of faith in the form of acceptance."

I'm so glad that you are here to put this into words! I would never be able to find the words to describe what this is like!
Lenore
January, 27 2011 at 2:41 am
Thanks for this Holly,

I believe this is exactly what may be happening to me. I really appreciate you taking the time to share.